Catherine Graham’s debut novel Quarry (Two Wolves Press) won an Independent Publisher Book Awards gold medal for fiction and “The Very Best!” Book Awards for Best Fiction. Quarry was also a finalist for the 2018 Sarton Women’s Book Award for Contemporary Fiction, Fred Kerner Book Award and “The Very Best!” Book Awards for First Book. Quarry’s Launch was supported by TIFA through Toronto Lit Up. View the launch on YouTube. Read a TIFA/Toronto Lit Up interview. Listen to Graham talk about Quarry on CBC Radio One The Next Chapter with Shelagh Rogers.

Quarry is a popular choice for Book Clubs including BooknBrunch. Consider Quarry for your Book Club!

Quarry receives glowing reviews in The Toronto Star: Catherine Graham’s debut novel a fearless coming-of-age tale, the Owen Sound Sun Times: I read Quarry, finished the last page and then started it again. It is that good and Hamilton Review of Books.

Quarry is featured in The Hamilton Spectator: Separating fiction from fact in new novel ‘Quarry’.

Quarry is one of six select books on the WXN Summer Reading List: “If you want to discover rich Canadian fiction about love and loss, Quarry by Catherine Graham.”

Quarry is a Best of Canada Read 2019 for Consumed by Ink.

CBC Radio One The Next Chapter with Shelagh Rogers: Listen to Graham talk about Quarry here.

Storylines: Listen to Graham’s interview with Christine Cowley by clicking below.

Spur Festival Calgary: Listen to Graham’s interview with Helen Walsh by clicking below.

Listen to Graham’s interview with Lynn Pickering on The County Writes…The County Reads. 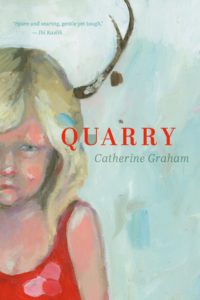 Dive in. Turn to water before it freezes.

I didn’t know what a quarry was until I saw the one that would belong to us. A pit carved for mining. Dig what you need—the dynamite gap—leave a hole for evidence. Don’t think about air filling it up. Air fills up everything. Water makes the quarry more than it is; the blue we were drawn to. On the dock, looking out. My mother on one side. My father, the other. Their big shoulders pressing me in.

Set in southern Ontario during the 1980’s, acclaimed poet Catherine Graham’s debut novel is layered like the open-pit mine for which it is named. Caitlin Maharg, an only child, lives in a house by a water-filled limestone quarry whose gothic presence is elemental to the story.

With loving parents and what appears to be an idyllic upbringing, much has been kept from her and she learns that her mother is dying. But there are things Caitlin knows in a wordless way, the way she knows every inch of the quarry. By the time she’s in her last year of university, her losses multiply. And when a series of family secrets emerges, Caitlin learns to rely on her inner strength. She gains the confidence she needs to confront her maternal grandmother and carry out her father’s last wish.

Lyrically charged, jewelled with images, and at times darkly comic, Graham’s prose weaves a mysterious and hypnotic tale of loss, deception, family shame, and the courage to swim the depths of life alone.

“…this imaginative coming-of-age tale is by turns tense, funny, painful, wondrous and all too real: a crazy, fearless dive into life’s deepest mysteries.”
— Nancy Wigston, The Toronto Star

“Quarry is a drop-dead gorgeous piece of writing, a novel that gave me goose bumps, even on a second reading. Search it out and read it; gentle, tough, and a superb work of fiction.”
— Andrew Armitage, Owen Sound Sun Times

“Quarry is the delightfully told coming-of-age story of a young woman named Caitlin Maharg, growing up in southern Ontario in the 1980s.”
— Graham Rockingham, The Hamilton Spectator

“I began reading Quarry with interest which became enthrallment and the feeling that I was experiencing, with Caitlin, not only the grief and losses but a process of maturation and forgiveness, and the slow taking her life into her own hands. The natural imagery of the book is so integral to this process, so informed by the imagination and the way it enacts and enables Caitlin’s grieving and her maturation. I was deeply and truly moved, the border between reader and character entirely erased as I read. A marvelous novel.”
— Eleanor Wilner, The Girl with Bees in Her Hair

“An accomplished poet, Graham makes her fiction debut with the luminous Quarry, a delicate coming-of-age story with an engaging protagonist. [Her] lyrical writing shines through … spinning beautiful contemplative images out of simple moments. With Quarry, she has mined her personal experience of loss to produce a strong debut novel—mysterious, rich, and full of quiet insights about family dynamics.”
— Alissa McArthur, Room Magazine

“This intimacy with grief at a young age combined with her poetic discipline gives the book emotional stealth; it tunnels upward like water beneath a frozen surface, a phenomenon described in one of its many breathtaking passages…There are also gloriously precise images burrowed like bright daggers in the concreteness of Graham’s prose.”
— Krista Foss, Hamilton Review of Books

“If you have been searching for a new book to read that is compelling, intense, and full of imagery, look no further.”
— Ashley Giovannini, Niagara This Week

“It is truly amazing how well this story flows. And the plot is memorable. Graham’s previous work in poetry has built a foundation in writing novels that are unique and well-crafted. This is a great piece of literature which explores the range of human emotions of a young girl in some truly stressful situations.”
— The Library of Pacific Tranquility

“Quarry is a fine debut novel and is a notably rewarding read and I highly recommend it. It would be an excellent book to consider for a book club. As such, I have put Quarry on the 2018 longlist for a “The Very Best!” Book Award for Fiction and I have added it to my “Summer Reads” list as well. I rated it “five stars” at Goodreads, too!”
— The Miramichi Reader

Q&A about Quarry with IFOA and The Library of Pacific Tranquility.

“Spare and searing, gentle yet tough, Quarry is a beautifully crafted novel about loss, identity, and a woman’s freedom to choose life over death. Written by one of Canada’s leading poet-turned novelists, Quarry explores one woman’s journey as she uncovers the layers of secrecy and tragedy that have shaped her small but close family. After the death of her parents, Caitlin Maharg finds that, like the sedimentary rock that defines her family’s home, it is often not easy to remove the layers of habit and half-truths that threaten to bury her alive.”
— Ibi Kaslik, author of Skinny and The Angel Riots

“Quarry flows through the legacies and layers of grief, and emerges into the joy and shock of discovery. It is a wonderful book.”
— Ken Murray, author of Eulogy

“Written in gorgeous, focused language, Quarry pulls us effortlessly through a forest of half-truths and family myths where we find how love can beget disaster and how secrets can give birth to isolation. This book sweeps forward, turning expectations inside out, giving us relationships that feel so real you’ll flinch, and revelations both startling and inevitable. As we peel back the layers of Caitlin’s family, Caitlin herself is acquiring layers, growing from a raw, untested girl to a woman who readers will cheer for.”
— Grace O’Connell, author of Magnified World and Be Ready for the Lightning

“… what a pleasure it was to read Catherine Graham’s deceptively complex debut novel Quarry.”
— Kerry Clare, Pickle Me This

“The star of this book is truly the writing; poetic, lyrical, vivid.”
— Consumed by Ink

“I love this book. That first chapter, for example, I was struck by how brilliant it was. How everything that happens there, is in a way, foreshadowed. It’s sensational.”
— Mary Lou Finlay, from the Toronto Lit Up Quarry Launch Video