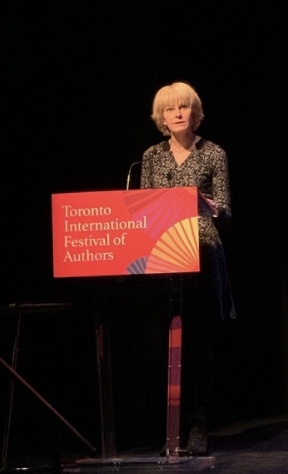 Graham’s poem “If Tiny Crystals Form Close to the Earth’s Surface They Form Diamond Dust” was selected for the 2021 Poem in Your Pocket Day booklet.

Graham was a featured reader at Poetry London. View her reading here.

Graham’s poem “Peach” appears in The Ekphratic Review and TERcets, their first podcast.

Graham participated in the Toronto International Festival of Authors 2020 as both moderator and interviewer. View her Writers’ Trust Canada The Re-Read interviews here.

She also moderated two The Re-Read events for TIFA and The Writers’ Trust of Canada.

Graham led a Poetry Craft Talk, Seeing into Seeing: The Eye at Work.

Graham is named one of 6 Poets You Should Know: Contemporary Poets Mining the Depths of Language.

Hear Graham read her poem “Masks” at Poetry and Healing.

Graham talks about why she loves the poetry of Elizabeth Bishop on The Next Chapter with Shelagh Rogers.

Graham participates in the 40th Edition of TIFA and appears in this TIFA comic.

Graham led a talk: Making and Breaking Patterns in Poetry for the CAA Toronto Branch during National Poetry Month.

Read about some of Graham’s favourite books in The Poetry Question.

Quarry is reviewed in Consumed by Ink: “The star of this book is truly the writing; poetic, lyrical, vivid.”

Graham’s first novel Quarry, launched spring 2017 with Two Wolves Press and her sixth poetry collection, The Celery Forest, launched fall 2017 with Wolsak & Wynn (Buckrider Books). Her Red Hair Rises with the Wings of Insects is now in its second printing. Quarry made two bestseller lists during its first week of publication: Ben McNally Books and The Calgary Herald.

A Best Canadian Poetry Collection of 2017, and shortlisted for the Fred Cogswell Award for Excellence in Poetry, The Celery Forest appears on CBC Book’s Ultimate Canadian Poetry List.

The Celery Forest received praise from renown poet Michael Longley: “An impressive new collection, The Celery Forest is both powerful and beautiful, a work of great fortitude and invention, full of jewel-like moments and dark gnomic utterance. It faces into the dark and finds a way through.”

Graham talks about her debut novel Quarry on CBC Radio One’s The Next Chapter with Shelagh Rogers.

Graham appears on a panel with Kathleen McCracken at the University College Dublin conference Text/Sound/Performance: Making in Canadian Space.

Graham has been invited to read at Poetry Ireland, Dublin and the Seamus Heaney HomePlace, Northern Ireland.

Graham leads a workshop on The Short Poem at Knife / Fork / Book.

Graham is the “International Feature” in The Bangor Literary Journal. Read her poem The Woman in the Grand Canal, Dublin.

Graham participates in “A Halloween Marathon Reading of Mary Shelley’s Frankenstein” at the Toronto Reference Library.

Read Graham’s interview with Susan Howe, winner of the 2018 International Griffin Prize and Billy-Ray Belcourt, winner of the2 018 Canadian Griffin Poetry Prize in the Hamilton Review of Books.

Two of Graham’s poem appear in Poetry Pause: Domestic and There Is a Stir, Always. The Cutting Reason appears on 3Quarks Daily and Graham appears at the OLA Superconference 2019.

Graham is published in The London Reader’s #MeToo Stories of Survival Issue.

Read Graham’s blog posts on All Lit Up: Narnia for Ghost Animals: The Story Behind My Poem Winterhill, Poetry Cure: The Celery Forest and Open Book’s 20 Canadian Poets Share Their Favourite Poems of the Last 20 years.

Graham continues her role as TIFA Book Club leader for 2019 and is an interviewer for Humber School of Creative & Performing Arts / Toronto International Festival of Authors By the Lake Book Club.

Two poems appear in Juniper: You Come Home From a Trip Away and Somewhere on the other Side of Here. Read Fireglass at NationalPoetryMonth.CA and Yet Another Landscape with the Fall of Icarus in Train.

Graham appears at the IFOA Weekly event ‘What’s Life Got To Do With It?’

Graham presents and reads her poetry at The Canadian Network for Arts and Learning Conference/Gala in Ottawa on behalf of The Centre for Creative Learning.

Graham is one of the Ireland Park Poets. Walking tour info is available here.

Graham returned to the UK summer 2017 to perform in Edinburgh Fringe Festival 2017. She also read her work in London at the University of East London CapLet Series, Manchester at the International Anthony Burgess Foundation and Northern Ireland at the Linen Hall Library (Belfast), The Seamus Heaney HomePlace, and Open House Bangor Festival.

Read Graham’s poem “It Begins When You Stop Looking, Stops When You Are” in Ireland’s Southword Issue 32 here.

Read Graham’s interview with 2017 winner of the International Griffin Poetry Prize award, Alice Oswald, in The Toronto Review of Books.

Graham leads a workshop on The Short Poem at CAA’s CanWrite 2017.

Graham, along with Peter Robinson, participated in the Thessaloniki International Book Fair as part of TIFA.

Graham hosts at IFOA , interviews Claire Cameron for The eh List Authors Series and reads at the Spur Festival event: A Night of Irish Music this spring.

Graham’s poem “Boy and Lawn” has been chosen to be part of Poem in Your Pocket Day, a National Poetry Month program developed by The Academy of American Poets in New York in collaboration with the League of Canadian Poets.

Graham performed on five separate dates as part of Edinburgh Festival Fringe 2016 with fellow poets, Ian Burgham, Jeanette Lynes and Steven Heighton. Two reviews here, including a 5/5 star review. They were also featured in the Quill & Quire.  As a contributor to Scotland’s Gutter Magazine, Graham read her work at two summer launches: Glasgow and Edinburgh.

In celebration of Canada 150, Graham has been invited to lead one IFOA Book Club meeting to help bring Canadian authors and Canadian literature to the forefront. She writes about her book choice here.

Graham was one of the winning writers for the What’s Your Story? Contest. More info here, including her commissioned poem I Am One of 1511 Patients Resting at Lakeshore Psychiatric Hospital Cemetery.

Graham’s poem, “Kick the Can” from Taddle Creek is included in the Notable Poems list for 2015 for Best Canadian Poetry 2016.

Graham read at the Bowery Poetry Club in New York City and the 4th International Congress of Language and Literature in Linares, Mexico.

CBC includes Her Red Hair Rises with the Wings of Insects in 12 Great Books by Canadian Irish Authors.

To help celebrate the Aga Khan Museum’s Marvellous Creatures exhibit Graham read at libraries throughout the GTA this spring/summer to connect children with stories of animals in Islamic art.

For the second year in a row Graham is part of the CCL Poetry Weekend.

Graham’s work is anthologized in Boobs: Women Explore What It Means to Have Breasts.

Graham toured the UK during the fall of 2015 with fellow poets, Ian Burgham, Steven Heighton, Jeanette Lynes and Manchester’s Mike Garry. Readings in Manchester at the Chorlton Library, University of Westminster, London, Stratford-upon-Avon, Scottish Arts Club, Edinburgh and a workshop at St. Mungo’s Mirrorball, Glasgow. Click here for a review of their University of Westminster reading and here for their feature in Open Book Toronto.

Read Graham’s photo essay with photographer Elle Buetow (Toronto Clicks) for the Koffler Centre of the Arts. On May 7 2016 Graham and Buetow led a Jane’s Walk at The Beaches.

Graham talks about a favourite poem at Open Book Toronto.

Graham is part of Melanie Janisse-Barlow’s The Poets Series, a growing archive of paintings of poets.

Graham is interviewed in Prism International.

Winner of the 6th annual Poetry NOW competition, Graham was a featured reader at Harbourfront’s IFOA and one of the judges for the 7th Battle. She is hosting two events at this year’s IFOA.

Graham is one of “16 established, treasured Canadian poets” in All Lit Up’s Poetry Primer.

Graham is a featured reading at the Edmonton Poetry Festival and the Planet Earth Poetry Reading Series.

Her Red Hair Rises with the Wings of Insects is featured in Brick Books’ Celebration of Canadian Poetry and as part of the League of Canadian Poets: Food and Poetry theme at 49th Shelf.

Graham’s fifth collection, Her Red Hair Rises with the Wings of Insects, launched fall, 2013, was a finalist for the League of Canadian Poets’ Raymond Souster Award and the CAA Poetry Award.

Graham’s “Poetry as Art” was exhibited at Gallery on Wade. “A Stir Among Stars” sold.

Graham’s poem, “The Buried” is one of “Twenty-one More Great Canadian Poems to Know,” as recommended by Todd Swift in the Poetry Foundation/Tupelo Press anthology, Another English: Anglophone Poems From Around The World.

Graham participates in a book trailer for the anthology, I Found It at the Movies.

Graham’s poem “There Is a Stir, Always” is featured in Verse Daily.

Graham is the winner of the IFOA’s Poetry NOW 6th annual Battle of the Bards.

Graham’s poem “Between His Finger and His Thumb” appears in Poetry Daily.

Graham is a PageTurner for Project Bookmark Canada.

An excerpt of Graham’s work-in-progress novel, Quarry appears in Joyland.

Stuart Ross listed Graham’s Her Red Hair Rises with the Wings of Insects as one of his 13 poetry favourites from 2013 along with Kate Sutherland.

Four new poems by Graham are featured in Eyewear.

Read How Her Red Hair Rises with the Wings of Insects Came into Being at The Puritan’s Town Crier.

View Graham’s reading of “Cloak” in the Room 36.3 Trailer: Murder, Lust and Larceny.

Graham is the inaugural judge for the Aspiring Canadian Poets Contest.

Graham’s writing is anthologized in The Field Day Anthology of Irish Writing, Vol IV & V, The White Page /An Bhileog Bhan: Twentieth Century Irish Women Poets (Salmon Poetry), She’s Shameless (Tightrope Books), A Generation Defining Itself: In Our Own Words Volume 8 (USA), And Left a Place to Stand On an anthology of poetry and essays on Al Purdy and Leonard Cohen You’re Our Man (Foundation for Public Poetry, Montreal), The Art of Poetic Inquiry (Backalong Books), Variety Crossing 12th Edition (Variety Crossing Press), Poet to Poet Anthology (Guernica Editions), I Found it at the Movies (Guernica Editions), The Other 23½ Hours (Wolsak & Wynn), Boobs: Women Explore What It Means to Have Breasts, The Poet’s Quest for God (Eyewear Publishing), and forthcoming in Menstruation Anthology and Mentor Me: Instruction and Advice for Aspiring Writers.

Read Graham’s winning poem: The Queen Is Not Welcome Here.

Read Graham’s Tribute to P.K. Page at The Malahat Review.

Graham’s poetry is showcased in Poetry is Public.

Nathaniel G. Moore chooses Winterkill as one of the 31 Books of December in Open Book: Toronto.

Find out what Jessica Westhead is reading at The New Quarterly’s Who’s Reading What.

Graham is quoted in “The 6 A’s of Healthy Bereavement,” Alive Magazine.

The Torontoist speaks to Catherine Graham about the Rowers Pub Reading Series.

Graham’s work is discussed in The Best American Poetry blog.

Graham is one of the women chosen to participate in Luminato’s Toronto Mille Femmes.

Catherine Graham has been “seen reading”.

To be informed of Graham’s future readings please join the Patchy Squirrel Lit Serve or check out the event page at Open Book: Toronto.